The Continuing Demise of the Australian Newspaper Comic Strip

Recently, I blogged about an online poll that was being held by APN News and Media, which publishes daily newspapers from Mackay in North Queensland to Clarence Valley in Northern New South Wales. The blog was entitled: Support your local Aussie newspaper comic strip artist, before it's too late and there are none left!!! and went on to detail how APN was culling its single comics page, that is forced onto all of its separate newspapers regardless of the individual editor's wishes, from 6 comic strips down to just 3. Their reasoning for this is that they have done extensive research and discovered that their readers would prefer more puzzles and less comic strips which, when translated from bullshit into reality, means we don't want to pay for quality Australian comic strips any more. We'd rather just keep the three cheaper overseas strips and pad the rest of the page out with even cheaper sudoku and crossword puzzles, regardless of what our readers want. Case in point? First take a look at the results of the online poll, which they closed a day earlier than had been announced. 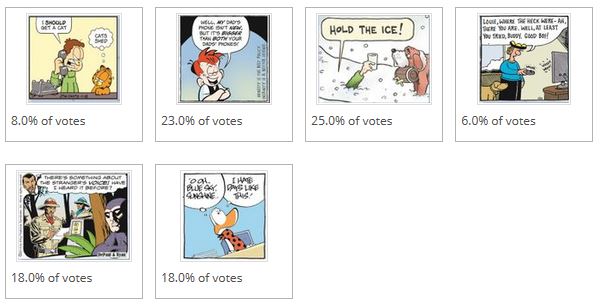 So how did the Australian content stack up? Insanity Streak came first place at 25%, Ginger Meggs came a close second at 23%, while Swamp Classics came an equal third place with the American produced Phantom comic strip. Garfield and Overboard didn't even come close at a dismal 8% and 6% of the votes respectively. All things being equal, you would expect that Insanity Streak and Ginger Meggs were safe from the cull with a possibility of Swamp being out done by the Phantom as the American strips are cheaper to purchase.

So imagine my surprise to learn that Jason Chatfield received an email about a week after the polls had closed to say that APN no longer required his services and were removing Ginger Meggs from their comic page line up.

Naturally, Jason assumed it was just a case of APN's bean counters saying they couldn't afford the Australian strips any more, so he offered to let them have the strip at a reduced rate. Instead of taking Jason up on the offer, APN decided to claim that the poll results were not accurate due to the amount of online rallying they had witnessed during the voting period. Erm.... if you're going to do an online poll, then of course people are going to ask for help to save the strips they love. What did they expect? Only people from their readership areas would be voting? Using that argument, it was a poll that was doomed to fail from the beginning. They also claim that there was a print poll where people could phone up, but no evidence has been found of this, and it is also unlikely that they'd have enough people phoning up in such a short amount of space to make much of a dent in the online poll results.

I have not heard if any of the other two Australian comic strips have survived the culling process or not. Gary Clark's wife and manager of Swamp comics, Yvonne, has told me she has not received any news from APN either way concerning her husband's creation. Yvonne has given me permission to quote her:

So where does this leave the Australian comic strip industry now?

Even if it was just Ginger Meggs that got the chop and the other two strips survived, it's one less Australian comic strip artist who's getting published and one less that's getting paid a minuscule fee to provide a daily and Sunday comic strip for all of their fans. There aren't that many left in the pot to play Russian roulette with the next time one of the big three news print companies in Australia decide they'd like to save even more money by reducing the size of their comics page even further. It's not just APN that's doing this to the humble Australian cartoonist. News Corp and Fairfax are just as guilty with their own versions of the national comics page that is forced onto every editor of every newspaper they own in the country. Gone are the days when an editor could happily choose which comics were printed in the publication he or she was in charge of. The individual editors themselves aren't happy about it either, I've spoken to a few when I was trying to get my own comic strip onto the market. They have no choice but to do what the parent companies dictate. Never more will we ever see a new Australian comic strip in newspaper print. It would mean that one of the big three newspaper bosses would have to replace a strip that they're already using, and if your strip is unknown, there's no chance they'll even consider it. They're already going out of their way to remove the well established strips that have legions of loyal fans, so there's no hope at all for us newcomers. Auspac Media happily took my own strip, Bushcamp Comics, to put in its database for potential sales in print media, but they have no one to market it to. The newspapers just aren't interested any more. There are currently 28 Australian daily comic strips in Auspac Media's catalogue (as of the time this blog was originally published), all ready to be printed via syndication, but how many are actually in print and earning a paltry income for the artists? You'd be lucky to find more than a few.

I've said it before, and I'll say it again. If this mentality had existed 90 years ago, Ginger Megg's would never have had the opportunity to be put into newsprint. Firstly as a Sunday strip and then as a weekly strip, at the encouragement of a newspaper editor in both instances. Snake Tales was originally titled The Old Timer and was first published in The Daily Telegraph on 25 April 1974, because the newspaper editor liked what was offered to him and gave Allan Salisbury a go. Gary Clark's Swamp was first published in 1981 in the Sunshine Coast Daily, which is now living under the dictatorship of its parent company APN. The very same news company that is now in the process of seeing if it wants to ditch Swamp from the Sunshine Coast Daily in favour of a clearer to read and cheaper to purchase sudoku puzzle! There are other successful Australian comic strips that have built themselves a loyal fanbase and in some cases now have a cult like status amongst Australian culture. Heck, some of them even managed to crack the overseas market once they showed how successful they could be in their home country. And how did they all get so successful? Not only through lots of hard work, trying to come up with a new commercial quality strip for EVERY DAY OF THE YEAR in order to maintain their livelihood and to keep their legions of fans entertained, but initially because a newspaper editor gave them a go when the comic strip was still young and unknown and the cartoonist was out busting his or her guts to market it to any newspaper editor who would give them the time to see what they had to offer. In the process the editors gave the artists a fair chance of having a crack at making a living out of something that they were not only good at, but something that they were passionate about as well. Can you imagine a world that was never brightened by the daily antics of Snake, Ding Duck, Ginger Meggs, or Kool Roo (just to name a few)? Now imagine a new generation of children who grow up into adults never knowing an Australian comic strip apart from what they may see in archives on the internet, or the second hand antique book stores. There will never be a new Australian comic strip, so there will never be a new generation of kids who turn to the comics pages of their parents' newspapers and grow up being delighted by what the Australian comic strip artist has to offer. There will always be Garfield from the USA, and there will always be Peanuts reruns from the USA, but there will never be a new generation of Australian comic strips for them to grow up with, and that's a damn shame. If it was the television industry, the radio industry, or some other form of media industry in Australia, the government would have stepped in to say "Hey, you must produce at least this much Australian content so that Australians can have a fair go at working in your industry, both in entertainment, advertising and news content." but there are no such regulations for the news outlets in our country. And with all the bagging the current Australian government has been doing of the political cartoons that rightly parody and mock the stupidity of their policies and actions, it's unlikely the current government will even think about trying to help a newspaper cartoonist to stay in a job, let alone encourage any new ones into the picture to try and keep the Australian newspaper comic strip industry alive and make more generations of Australians happy to brighten their days with their favourite Aussie comic strip characters.

So what can be done about this? I asked the same question in my last blog and the answer is still the same. NOTHING! The bean counters have made up their minds and they don't care if it's destroying an age old tradition and killing off the daily comic strip cartoonists of our country. So make the most of the Australian comic strips while they still exist folks. Cherish them while they're still in print, what's left of them. It won't be long before they're just be a memory that we can tell our great grand-kids about.

I must give a big thank you to the newspaper editor of the Sunshine Coast Daily, whoever that was in 1981, for giving Gary Clark a crack at the Australian comic strip market. I'm a proud fan of Swamp Comics as are a great many other people who read his strip daily as it found its market and began appearing in different newspapers around the country. In the same paragraph, I must also give a big raspberry to Bryce Johns, the current Editorial Director of APN for going out of his way to destroy the very industry that has helped to fill the page of the most read newspaper section, alongside the front page section and the sports section in the history of Australian newspapers, the comics page. Enjoy your bigger sudoku puzzle Bryce, and your shrunken down Garfield strip that will probably be impossible to read anyway... while your newspapers are in print at least. I know of quite a few people who purchase their newspapers based on which comics are in them. It's one of the few things left that you print that people still prefer to read in print. I hope your bean counters prove useful when you're figuring out how to justify the cost of all your newspapers that people aren't interested in purchasing anymore because there's nothing in there they can't already get for free online via their smartphones and tablet devices on the way to work. You certainly won't be encouraging any kids to pick up your publications to have a squiz if there are no decent comic strips for them to look at, and they're the ones you'll be wishing were buying the newspapers eventually as they all grow up into adults looking for a way to look at the news. It's as simple as that.